From Adelaide Now May 15

Adelaide, do you remember the East End Market? 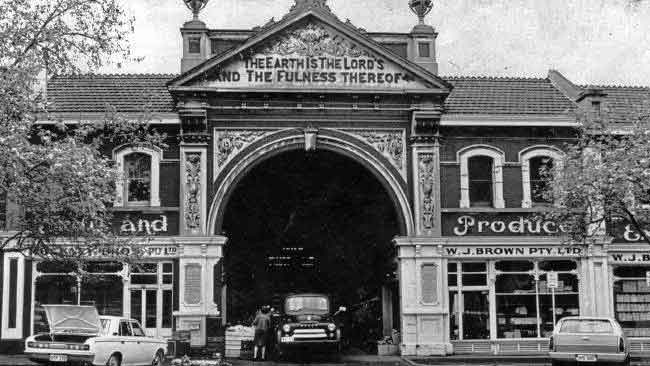 The facade of East End market on Grenfell St, Adelaide


I ALWAYS loved the comings and goings and the pure energy that was the East End Market on East Tce.
Three days a week, Monday, Wednesday and Friday, the streets immediately around the markets were closed off just after midnight and trucks laden with produce, freshly picked and packed from the market gardens of Adelaide, would arrive to jostle and push for parks and begin the task of unloading their harvest.
Hand trucks and forklifts would pick up boxes, pallets or wooden containers of fruit or vegetables, stall owners and workers would rush between street and stall, buyers would barter and buy the goods they required, it was a real hive of bustling activity.
By 9am, East Tce and Rundle St would be covered in cabbage leaves and other leftover rubbish and litter, then the council streetsweepers would come in and clear away the debris. 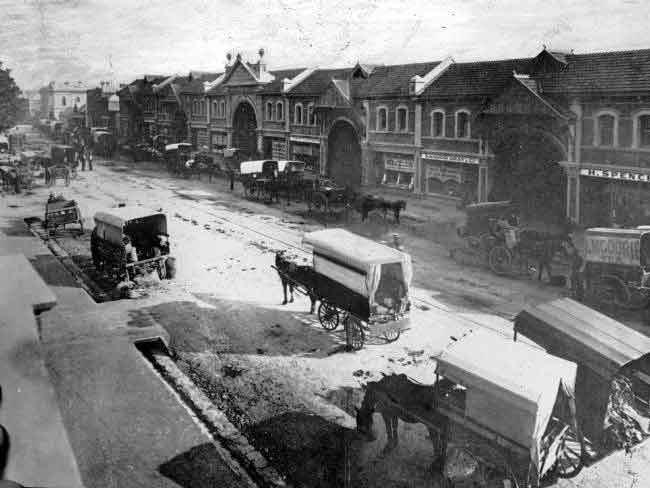 Outside the East End Market in 1905 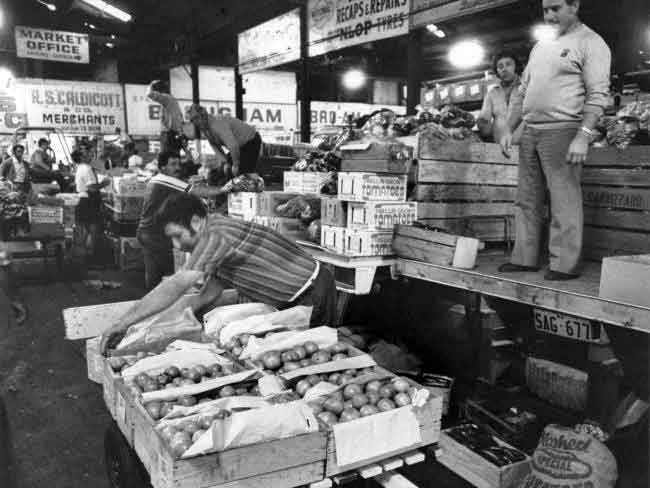 Just before 7am at the East End Market in 1981. Coismo Sacca of Virginia packs tomatoes.


Bill Chartres, who spent his entire life working in the East End Market, firstly for his father and later for himself, has now established a website [http://www.christmaslane.info/markets.htm] of those years.
“I first went to the market with my father when I was about six, that would have been in the mid-1940s,” Bill recalls. “But I didn’t start really working there until I was in my early teens.
“It was a rather strange place, it seemed like everything was always happening at once, but because it was so small you got the ‘feel’ of the whole thing that was going on around you, everybody was connected. 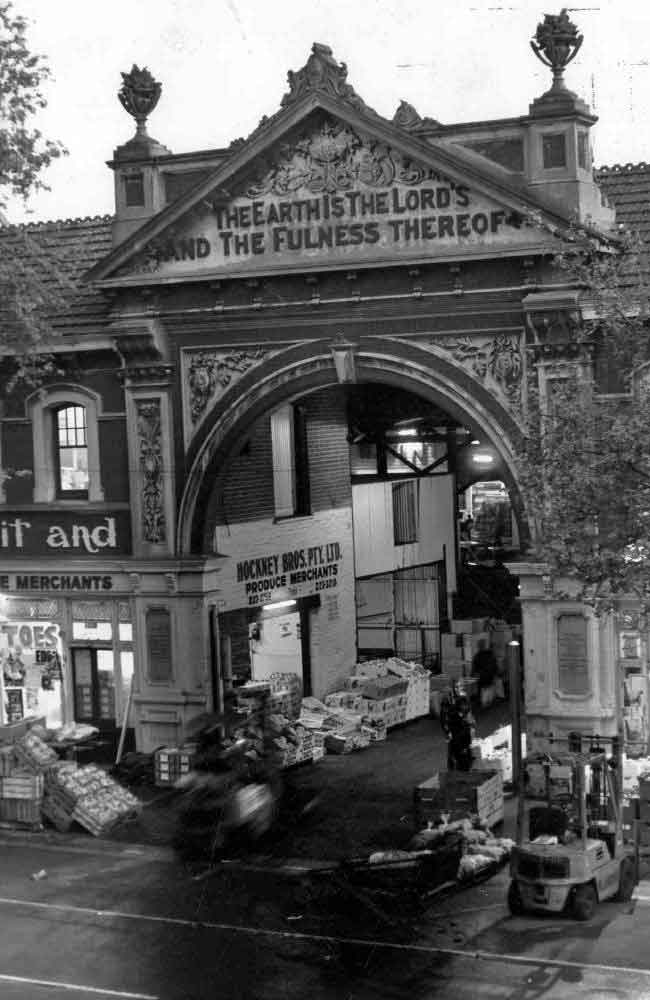 The last day of trading at the East End Market on Grenfell St, September 1988, before the market was moved to Pooraka.
[Although Friday September 30th was the last "Market Day" at the East End, trading actually finished on Saturday 1st October 1988, and the Pooraka Market open for trading on Monday 3rd October"] 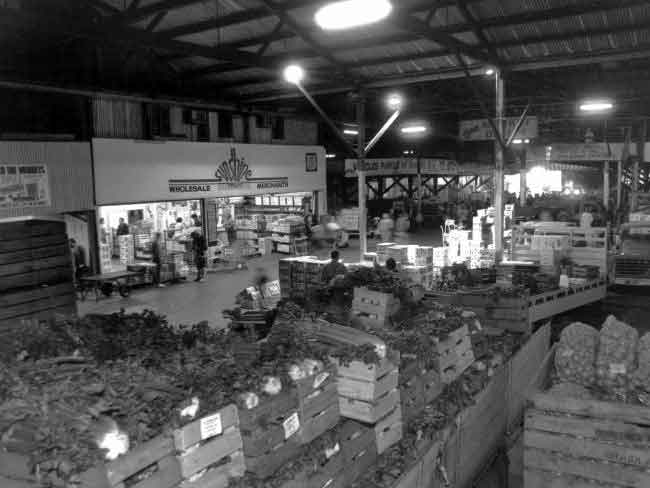 An undated photo taken inside the East End Market.
[I believe that this photo would have been taken in October 1988]

“It wasn’t unusual to start work at around midnight or 1 o’clock in the morning. If we had a truckload of apples for example, before the days of the forklift, that would take up to one and a half hours to unload.”

The buyers would then come in at about 3.30am or 4am and once the siren sounded they would rush between trucks and stalls to hand-select their boxes of produce, loading them on to their wooden hand trucks.

Sally Carpenter Nanotti has fond memories of her child¬hood years spent at the East End Market.
Posting recently on the Adelaide Remember When blog, she recalls “getting up in the early hours and heading in there in Dad’s (Robert Nanotti) truck with my sister. Dad would do his buying, give us a push around on a flat-top trolley. 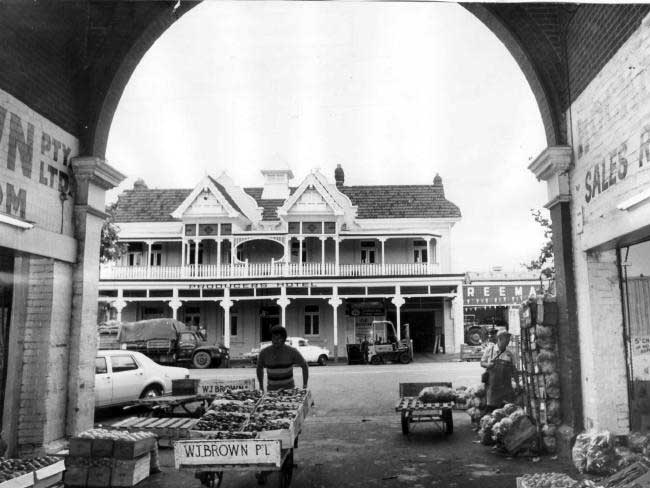 Trevor Alfred, of W.J. Brown Wholesale Fruit and Vegetables, pushes a barrow loaded with fresh fruit at the East end Market in 1976. 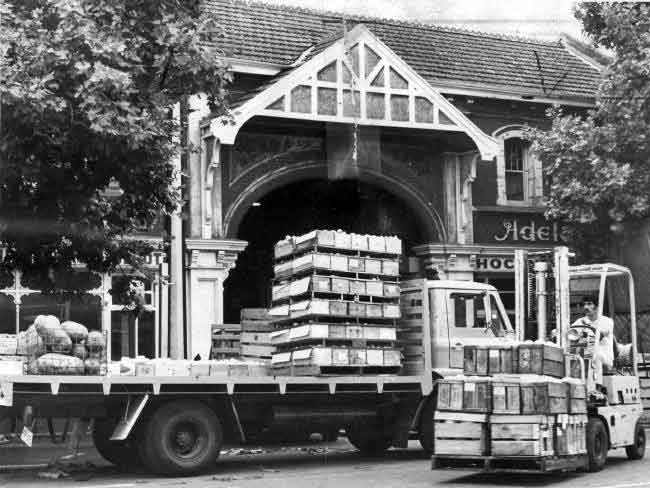 Another photo taken in 1976 -- Trucks unloading outside the market.

“Then, once he was done, we’d all get a toasted ham and cheese sandwich and a hot chocolate and eat it in the truck, watching the hustle and bustle of the market. Then we would be off to our fruit and veg shop, owned by my Dad and Grandpa (Arthur Nanotti), which was on Magill Rd to help set things up. Great memories”.

Jane Ray wrote: “My uncle Fred had a fruit and veg shop in the Barossa and as a wonderful treat I went to the market with him a few times. “What an adventure; spending the night at his home, up and off to the market in the dark, all the smells, noise and excitement, then back home as the sun was rising. Life was much simpler then!” 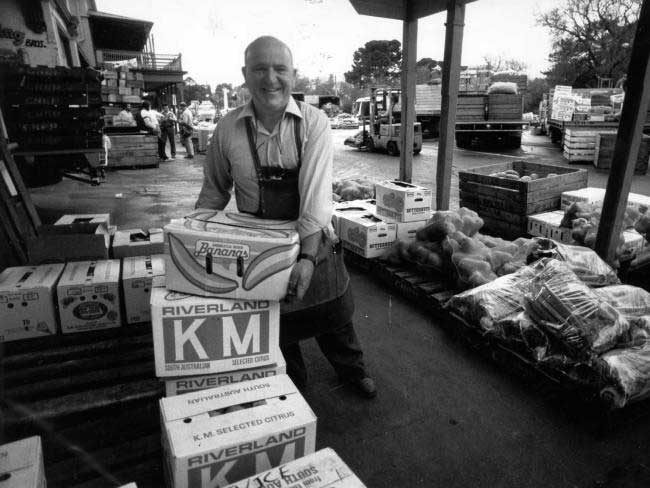 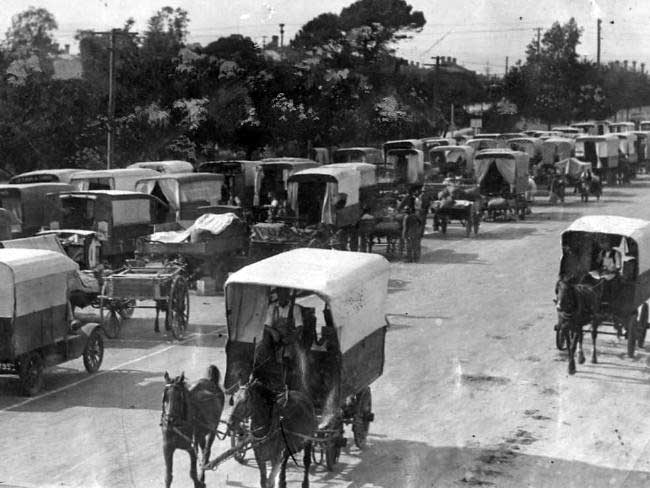 Seller's horse-drawn buggies head down Grefell St to pick up fruit and vegetables suppies to sell in the suburbs at the East End Market, 1929.
[I would suggest that this photo was actually taken on East Tce., looking South from Rundle St.]

Kathi Cannizzaro also remembered: “I used to go into the market with my Dad Pat Martin who had a fruit cart in the Rundle Mall in the ’70s and early 1980s. The cart was stored at the market, where we stocked it with gleaming polished fruit every day. “My brothers and I would help build the shows of fruit and it was a great life for us kids. I also remember Dad taking us to Ruby’s for a milkshake”. 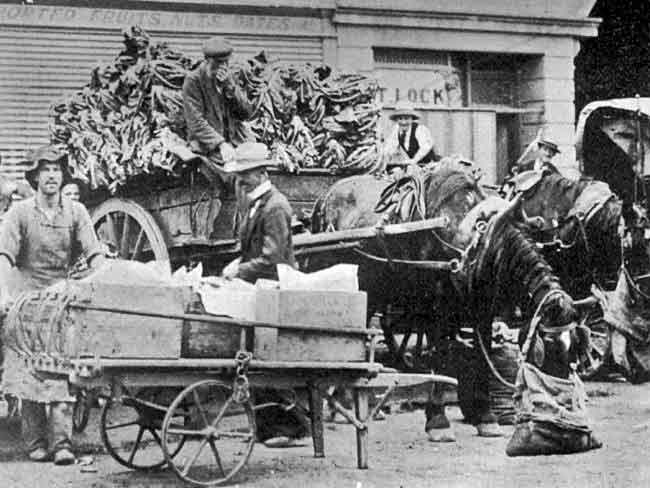 Back to 1903. This early morning at the East End Market, where sellers are waiting for buyers. 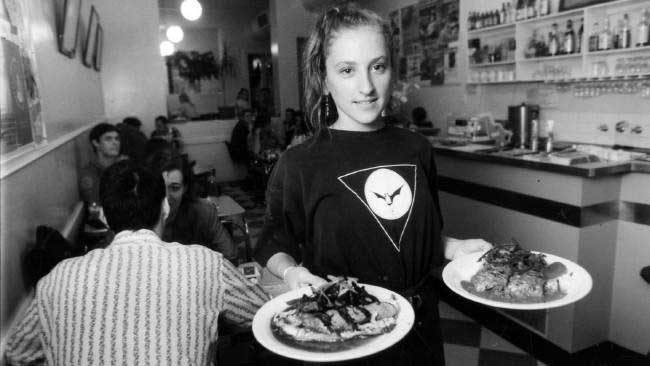 Waitress Danielle at work inside Ruby's Cafe.
This photo was taken in 1993, several years after the markets moved.

By the mid-1960s, it became apparent that there was a need to relocate the East End Market, which was opened in 1867.
The streets surrounding the area were regularly overcrowded and the disruption to traffic in the city caused by the usual street closures was becoming a source of real concern.
It was not until 1985, however, that the State Government made available a parcel of land north of the city at Pooraka to establish a new produce market.

Bill Chartres says: “It was something that had to happen. I think everybody knew it was the right thing to do. In East Tce, it had become very crowded, whereas the new location was wide open with plenty of space and lots of room to move.” 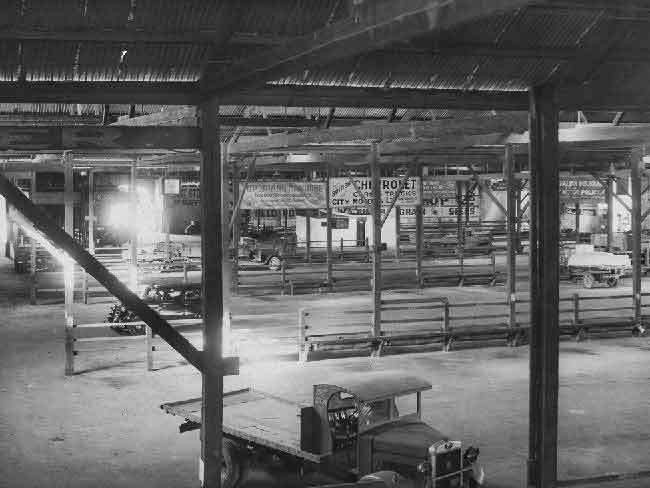 A look inside the East End Market in 1938. Picture: State Library of SA

Construction of the new facility at Pooraka started in late 1987 and was completed in September 1988.
And so the old East End Market closed its doors for the final time and ceased operations on Friday September 30, 1988.
On the following Monday, October 3, the Adelaide Produce Market started trading for the first time at Pooraka.
Bob Byrne is the author of Adelaide Remember When, and posts memories of Adelaide everyday on his Adelaide Remember When Facebook page. 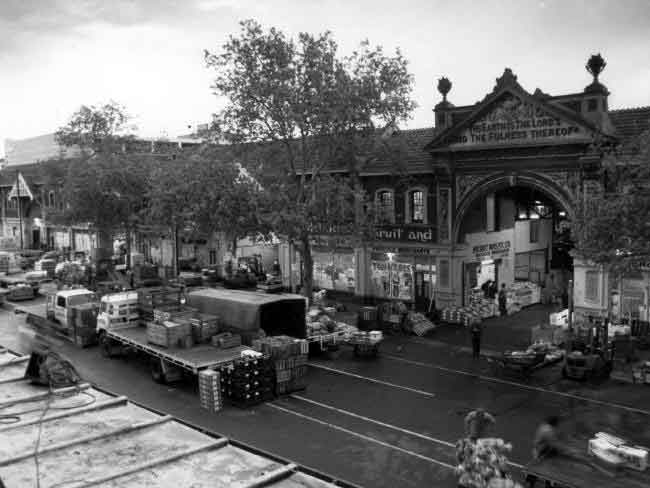 Last day of trading at the East End Market on Grenfell St, September 30, 1988
[Although Friday September 30th was the last "Market Day" at the East End, trading actually finished on Saturday 1st October 1988, and the Pooraka Market open for trading on Monday 3rd October"] 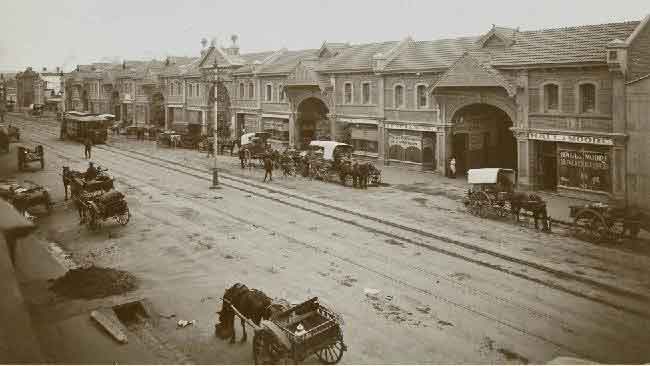 I have added a couple of comments to this article, which are shown thus [a comment by Bill], these are made, not as a critisim of the article, but in an effort to ensure that it is accurate.
I whish to thank Bob Byrne for the article.
Many people have fond memories of the East End Markets and Bob has shared many of these on his
Adelaide Remember When Facebook page.
Bill Chartres. 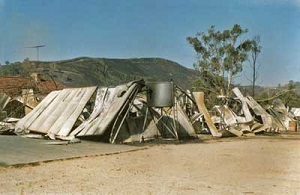 I, Bill Chartres, first attended the “New Market” in the 1940’s (aged about 6) with my father (Wal (“Jinks”) Chartres) who managed the Fruit Sales Floor of Silbert Sharp and Bishop Ltd.
In 1948 dad established the family business (Chartres & Eitzen Pty Ltd ) and from this time I often attended the market with him.
During the 1950’s I worked in the market before school three mornings a week and during school holidays. I began full time employment in 1960 and continued at the markets until I retired in 2001.
In 1960 Chartres & Eitzen Pty. Ltd. established a fruit packing shed at Cudlee Creek in addition to its Sales Room at the market. However, following the disastrous bush fires of Ash Wednesday (16th February 1983) that destroyed the Cudlee Creek Packing Shed, I sold up and moved to Lobethal with Peg and our family.
I then went to work for the HL Banana Agency group, and when "HL" established another business (Sunshine Fruit Pty Ltd) in 1985 I managed that, firstly in the East End and later at the new Pooraka Market.

Our four sons, Nick, Wayne, Graham and Jason, worked with me at the Pooraka Market and Graham and Jason are both still working in the fruit industry (making them sixth generation [on Peg's side] and third generation [on my side], to be associated with the fruit industry in South Australia). Graham at Fresh Produce Group,in the Sydney Market and Jason at Le Manna Group in Adelaide's Pooraka Market.

CLICK HERE TO RETURN TO THE EAST END MARKETS PAGE